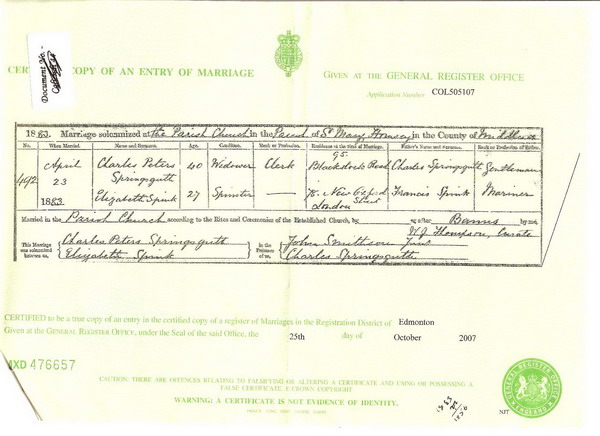 Charles Springsguth, 1843?-1908, was my great grandfather. It has been impossible to find a birth record for him, however he can be found on three census in London.

The inconsistency over his father’s name – is it Peter? or is it Charles? – implies that he did not truly know who his father was.

Furthermore, according to various sources, he used a variety of names :-

The impression was forming of a man in search of his true identity. The proverbial “brick wall” of genealogical fame was right in front of me!

As Springsguth is a very unusual name, I decided to research all those by that name in London in the early part of the 19th century. Perhaps they could give me a clue.

The youngest 2 daughters were :-

How odd! How confusing! What were the parents thinking of? Immediately I nick-named them the “Two Confusing Sisters”. And so they proved to be.

The two sisters remained single and appeared on every possible census. They were with their mother for the first 3 census. They also constantly move residence.

They all lied outrageously about their ages. The two sisters always kept the 2 year age separation and they used their first names randomly. Were they purposely trying to confuse? What was it that they did not want to the Enumerator to know?

Charles Peters is a fairly common name and there are a number of births registered with that name in the general area during the time period indicated by his age on the census. However they all can be accounted for and this is the only occurrence of this Charles Peters on any census or other record that I can find.

C. P. Griffin was Charles Peter Griffin, born 23 January 1843 in Hoxton, Shoreditch. According to the birth certificate (see below), his father was Peter Griffin, deceased, and his mother Anna Maria Griffin, formerly Spring. Again Peter Griffin is a common name and there are a number of possibilities of who he might be, but a marriage record for him and Anna Maria Spring cannot be found.

I was forcefully struck by the names in the birth certificate and on both the 1851 and the 1861 census – Charles, Griffin, Peter, Peters. All names that “our” Charles Springsguth used at some time or other. I was also struck by the name Anna Maria Spring which is very similar to both of the “two confusing sisters”.

A narrative was beginning to suggest itself to me.

Perhaps one of the “two confusing sisters” had an illegitimate child in 1843. Perhaps she had been raped, seduced, or the intended husband had died before they got to the altar. The two sisters and their mother collude to keep the baby, bring him up and keep his true identity a secret. The child was registered with a father who was conveniently dead and the mother’s maiden name shortened. On the 1851 census he has his registered birth name, aged 9, and on the 1861 he was Charles Peters, aged 19.

But that is just a narrative, a fiction, a fairy tale!

On 4th December 1882, Eliza Jane, the first wife of Charles Springsguth died (see death certificate below). The informant, who registered her death, is named as “Louisa Springsguth, sister of the deceased, of 12 Lorne Terrace, Templeton Road“. We know that Charles Springsguth had no siblings. Therefore this Louisa is probably Anna Maria Louisa, one of the “two confusing sisters”. Furthermore the address of the informant is the same as for the “two confusing sisters” on the 1881 census, a year or so earlier.

Then, on the 1891 Census, a Florence Springsguth, niece, aged 18, born Dalston, was staying with the “two confusing sisters”. She was, in fact, Eliza Florence Springsguth, 1873-1952, the eldest daughter of Charles and his first wife Eliza Jane. If “our” Charles was the son of one of the “two confusing sisters” then Eliza Florence was the grand-daughter of one and the great niece of the other, so the term “niece” covered it!

These two events demonstrates that the “two confusing sisters” knew Charles Springsguth and his family and were part of his life after the 1861 census.

Anna Maria Louisa Springsguth, died on 30th April 1896, aged 80, and her death certificate (see below) described her as “the widow of Charles Springsguth a law writer”. There is no trace of a marriage record for her and on every census she declared herself to be unmarried.

Her death was registered by “C. P. Springsguth, son, present at the death”. Poor man he must have been in a very difficult position. If he described himself as her son and went on to say that she was a spinster then it was tantamount to declaring himself to be illegitimate. So he created a husband for her – and he raided her family history to create this person. Her elder brother was Charles Matthew Springsguth, 1806-1839. The occupation of law writer was that of her father Matthew Clix Springsguth, 1777-1824.

The narrative mentioned earlier has now gone from being a fiction, a fairy tale, to being highly probable but unprovable as any evidence is circumstantial. There is nothing from the 1840s to prove that Charles Springsguth was the biological son of one of the “two confusing sisters”, nor is there anything to disprove it.

The death certificate of Anna Maria Louisa Springsguth is NOT proof but it does show that Charles knew her and her family history.

However, Charles, by describing himself as her son, demonstrated an emotional, psychological, and social attachment to a woman who may or may not have been his biological mother.

All comments are moderated